Recently in my company we wanted to use IHttpClientFactory  with our web app. But the problem was IHttpClientFactory was originally meant to be used with Asp.Net Core and not MVC 5. So I had to find a workaround that to be able to use it with older MVC applications. So in this post I’m going to describe how I’ve done that.

The Problem with using HttpClient as opposed to IHttpClientFactory

Installing the Necessary Packages for IHttpClientFactory

The first package to install is Microsoft.Extensions.Http. This package is dependent on many other package so don’t get surprised if you saw many other package also installed with it. We also going to need microsoft.extensions.hosting package to use the built in Asp.Net Core container. The reason we need to do that is the fact that there’s a lot of other dependencies involved when we want to resolve the IHttpClientFactory. If this was not the case we didn’t need to use the built in DI container of Asp.Net Core. Because we could directly inject whatever that is necessary to receive a functioning IHttpClientFactory.

Let’s take a look at the source code of the method use to register a IHttpClientFactory.

In this example use a new instance of HttpClientMappingRegistry. But if we try to do the same in our code we get an error because the class is internal and we can’t create an instance of it ourselves. There are many other classes here that have the same internal access modifier. So what we plan to do is to register the instance of the factory in Asp.Net Core container. Get an instance from the container and register it as a singleton in our Ninject container. I’m going to show you how to do that in next section.

In this section I’m going to create a Ninject module that act as a bridge between Asp.Net Core container and our Ninject container. In this case we’re going to have two DI container in our application which can have its own problems. But if we use it in a organized and focused way when it’s necessary, I think we’re going to be fine. So the code of the Niject module looks like something like this.

What we do here is we create a new container, register the dependencies needed to resolve the IHttpClientFactory. We do that by using AddHttpClient, there are other ways to register an instance such as Named Clients, Typed Clients etc. You can find more info on how to use the factory differently here. After that we register a singleton instance of the factory using Ninject’s ToConstant method.

Now that we registered the singleton instance of the factory, we can go ahead and use it in our application like so.

By using the factory we can have our old pattern on using a HttpClient within using statement but with some crucial difference. Now even though we get a new instance of HttpClient the underlying HttpMessageHandler might be the same. The factory is going to manage that for us, this illustrated best by the image we see in MSDN page. 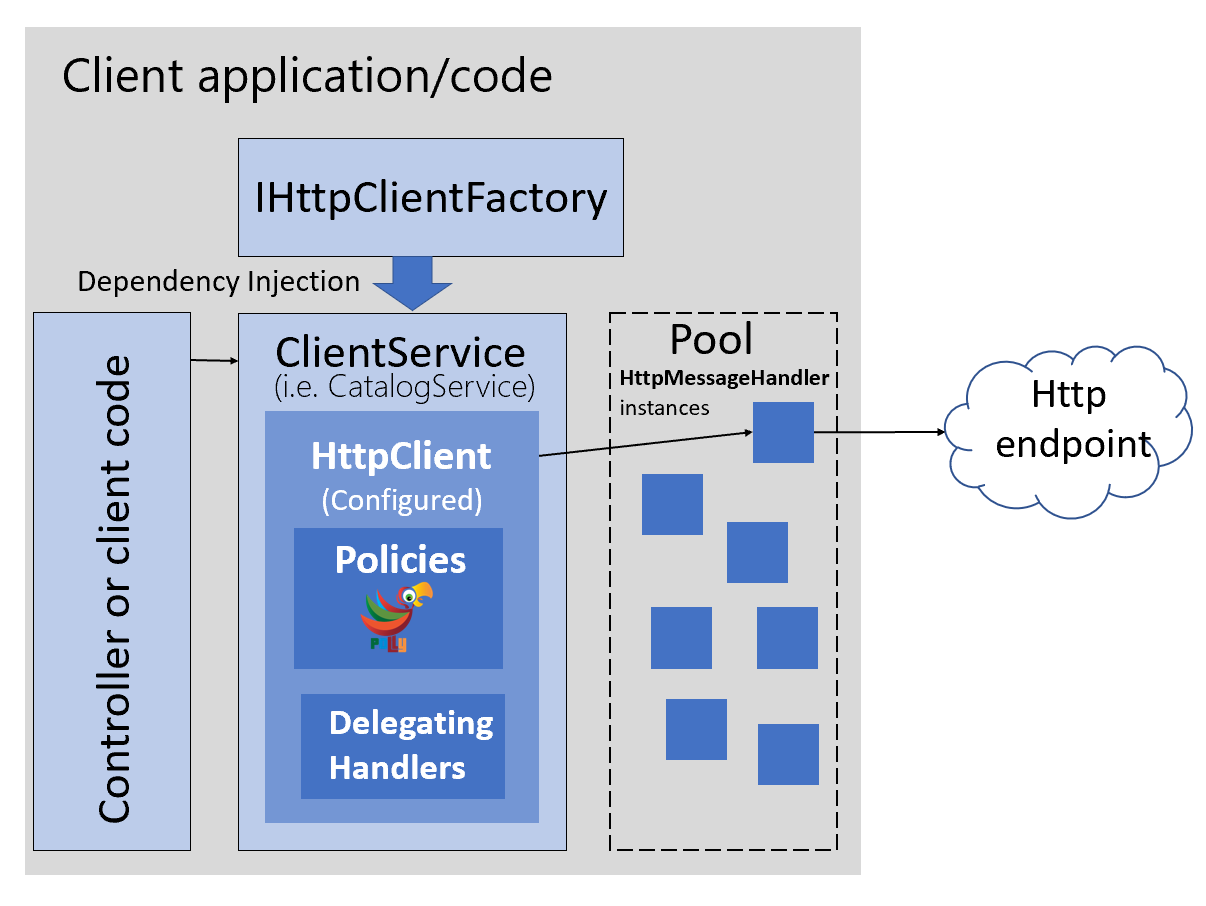 This post was particularly focused on using the IHttpClientFactory with older version of Asp.Net MVC, but there are other ways to use it. Also there are some configuration that can be done such as implementing retry and logging  policy. They are not covered in this post to keep it more focused on the problem we were trying to solve. Also I’ve created a working repository with an MVC 5 app using the code I described, you can find it here.